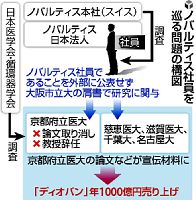 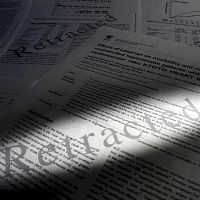 The Yomiuri Shimbun
Academic papers based on research by Kyoto Prefectural University of Medicine that were retracted
An employee of Novartis Pharma K.K. participated in a clinical trial for one of his company’s drugs at a university, and the results of the study were published without identifying the researcher as a Novartis employee, according to sources.
Novartis used the findings of the trial to promote the product, Valsartan, a drug for high blood pressure marketed under the trade name Diovan.
Annual sales of Diovan exceed 100 billion yen in Japan.
Fumimaro Takaku, chairman of the Japanese Association of Medical Sciences, said, “This case is extremely serious because it could undermine the integrity of clinical studies.”
On Friday, the association will hold a meeting to determine whether the Novartis employee’s involvement in the clinical research skewed the results of the trial.
The association will also examine the circumstances surrounding such clinical research and consider measures to prevent a similar incident from taking place again.
The research in question was conducted by Kyoto Prefectural University of Medicine with about 3,000 patients enrolled in the study.
The published research results claim Diovan can reduce the risks of stroke, angina and related conditions by 45 percent, even if blood pressure falls within the same levels achieved by conventional drugs.
Novartis used the trial results for advertisements and repeatedly held seminars for doctors.
But since late last year, six academic papers about the research results carried in academic journals, including that of the Japanese Circulation Society, have been retracted in quick succession on suspicion that the study’s data were faulty.
A professor in charge of the clinical trial resigned in February.
An investigation by the Japanese Circulation Society concluded the Novartis employee, who is now a part-time worker at the drugmaker, participated in the analysis of the data produced by the study.
But his name was not reported in academic papers based on his work. He was only identified as a researcher affiliated with Osaka City University, where he also worked as a part-time lecturer.
Academic papers indicated the Novartis employee had engaged in similar research at Jikei University, Shiga University of Medical Science, Chiba University and Nagoya University but had identified himself only as a researcher of Osaka City University.
Since March, Kyoto Prefectural University of Medicine, Jikei University and Shiga University of Medical Science have conducted internal probes to determine whether research data involving the researcher were manipulated.
The Swiss-based parent company, Novartis International AG, is conducting a third-party probe of the incident, saying the employee’s actions may have violated its internal rules.
Responding to a Yomiuri Shimbun inquiry, the company said it could not comment because the issue was under investigation.
In the wake of the developments, the Japanese Association of Medical Sciences, which comprises 118 medical science societies, decided to hold the meeting of officials to look into the matter.
The committee will hear reports from the Japanese Circulation Society and discuss measures to prevent a recurrence.
Saburo Sone, chairman of the committee, said: “I think it’s an extremely serious problem that an employee of a pharmaceutical maker used a university’s name at several other universities. Isn’t it natural to conclude this isn’t the work of an individual but is an organized effort by the company?”
The situation exemplifies the ever-present risk of a conflict of interest when businesses and academic entities work together, observers say.
However, it is widely thought that medical research, the results of which also affect the health of the public, requires higher standards of fairness.
Repercussions widespread
By Nobuaki Suzuki / Yomiuri Shimbun Staff Writer
The Japanese Association of Medical Sciences regards conflict of interest in drug research as serious because it affects not only patients who use a drug but also other members of the public, medical circles and related industries.
The administration of Prime Minister Shinzo Abe sees medical industries as a pillar of its new economic growth strategy, which calls for increased collaboration between business and academic circles.
But if the perception that companies and universities are in collusion spreads, the government’s plans for innovation in medical technology will stall.
The public could also lose opportunities to receive the most advanced medical treatments.
In 2010, a law was passed in the United States requiring companies to disclose conflict of interest in clinical research.
The Japan Pharmaceutical Manufacturers Association also produced a guideline on conflicts of interest and will begin a system in this fiscal year that urges voluntary disclosure about provision of funds from companies to doctors.
But establishing such systems among universities and other researchers has been slow.
In the wake of Novartis Pharma case, it is expected that both companies and universities will be pressed to quickly make transparent rules and clarify their accountability to society.